Hybra is a main character in Power Animals.

Hybra is nice and generous, but can be angred quite easily, as she can be a pushover at times. She is best friends with Wolfie, Roxie, and Ender-Stevie. She has fire and ice powers that she can sometimes control. She's in love with Stardust.

Hybra has a cat head, a wolf body, eagle wings, lion paws, and coyote teeth. She also has a diamond necklace. 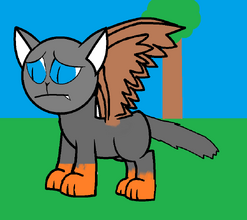 Hybra when she was young
Community content is available under CC-BY-SA unless otherwise noted.
Advertisement