Melly is a supporting former villain character in Power Animals.

Melly likes stalking Erica rather than other cyborgs, but It's unknown when she will turn into a heroine.

Melly is a purple squirrel-bat hybrid with black bat wings, a half metal face, blue suit and a teal bow. 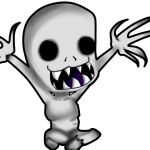